Rose Reisman was the keynote speaker at WFIM’s June Gala dinner.  Her theme was “The Art of Living Well”.  As shown by the wonderful meal, made from Rose’s recipes,  that the Toronto International Conference Center served the group of 120 women & men, “healthy eating is not difficult or in anyway a compromise on taste or flavour”.

If done right, our diets can provide us with a long, healthy life.  If done wrong, our diets can kill us through high cholesterol, diabetes, heart disease, obesity and stroke.  Rose realized many years ago that she wanted to be around for her husband and children, so she made healthy changes to her diet to ensure that she did.  From her first cookbook featuring high-fat desserts, she has now written numerous books, including “The Best of Rose Reisman” – which every attendee at the WFIM event received.

Another important thing to note is pesticides:  going organic is not always necessary – there are the “15 clean” foods that have very little pesticides used, such as onion, pineapple, asparagus, canteloupe, so there is no need to spend money to buy organic.  However, beware of the “Dirty Dozen”:  apples, celery, sweet bell peppers, peaches, strawberries, nectarines, Grapes, spinach, lettuce, cucumbers, blueberries, and potatoes.  These are foods that are best to buy organic.

As food manufacturers, we need to be conscious of what we are putting into the food we make.  More and more, consumers are looking for “clean” labels – for food that have little to no additives, saturated or trans fat.  Consumers – and us! – also need to be aware of the sugar, fat and salt levels in the processed foods we eat. Reading and understanding food labels is an important start to healthy eating and living well.

To those who attended the Gala dinner, I hope you enjoyed the meal, the networking, and Rose’s presentation.  I am looking forward to trying many of the healthy recipes in the cookbook! 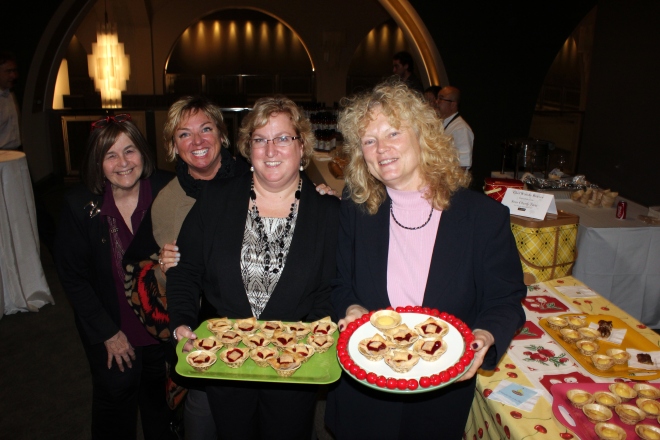 The evening started with a whole lot of chatter, registrants were checking out the Gala Premier Sponsor tables at CCC and Finlan Food Design.   A bit of sampling and free promo items were snapped up.  Everyone was enjoying networking before the event amongst two 20ft high decorated Christmas trees.

At 176 attendees this December Gala had the most attendees of all WFIM events!   There definitely was a lot of excitement in the room.  Bren de Leuuw – WFIM’s Director of Events, a dairy farmer’s daughter and former “Dairy Queen” from the same region as Chapman’s, was pleased to introduce Ashley Chapman whose family business supports local dairy suppliers.

Ashley started his introduction by saying he was surprised when HR told him he was invited to speak at a Women in Food Industry Management event.  He thought, “Crap, they probably think I am a woman as my name is Ashley”.  The story he told showcased the family’s entrepreneurial spirit and how they supported the community, customers, and suppliers.  It was truly heartwarming to hear of their humble beginnings and how they grew their business to be the largest Canadian Independent Ice Cream Manufacturer in 1985.  As a baby, Ashley’s room was above the engine room which provided some issues once he was older trying to stay awake when his old room became the production meeting room.

Some anecdotal stories of his Dad setting up a shooting range on top of their factory lead to a humorous story of his dad sliding down the stairs in his underwear then holding robbers with his revolver until the police arrived.

Despite the “big boys” foray into the world of frozen desserts, after the repeal of the Edible Oils Act in 2005, the Chapmans refused to join ranks, and made a commitment to use 100% Canadian Dairy to make their ice cream. Their family feels very strongly about supporting the local economy and providing a quality product, which we got to sample at dessert, courtesy of Chapman’s.

The fire at the Chapman factory in 2009 devastated over 35 years of hard work yet they didn’t despair and throw in the towel, after the town ran out of water, and all was lost including back-up tapes for formulas, invoices for customers and suppliers.   Fortunately, their long term employees knew their mixes by heart, and all their recipes were transcribed.  In three days, they were up and running to sell $12-13 million in inventory.  Unfortunately, their local customers, worried about future stock of Chapman’s ice-cream, emptied their warehouse within a few weeks.

A flyer arrived at their door offering a “fire sale” in Florida of a 4 year old factory with equipment necessary for production. Gay Lea and Parmalat were commissioned to make their mixes until they could bring to life their new plant, “Phoenix”.  Fortunately, they had business interruption insurance to cover all extraordinary expenses for one year.  This afforded them to keep operational using co-packers.  They went from 85,000 to 165,000 sq ft in less than 18 months.  Both parents run the business 50-50 with Dad taking care of operations and his Mom handling Marketing and Sales.  Their combined forces helped them to build their dream plant.

Ashley relayed in particular how his sweet natured Mom, Penny, has a reputation of being a smart, self-taught, don’t mess with her kind of woman and if “Mama ain’t happy, no one is happy!”  Today Chapman’s employs over 400 people, of which more than 40 % are women.  They also have a strong female leadership team:  50% of all supervisors, 50% lead-hands and all of HR are women.  The only areas primarily male dominated is maintenance and delivery drivers.  Everyone knows that if you don’t respect women at Chapman’s then Mom will “eat you alive”.

Ashley’s personal and touching account of salvation and recovery of this iconic Canadian brand was truly remarkable.

Check out this great blog from Vanessa Judelman, President of Mosaic People Development setting out her thoughts on last month’s WFIM event:  http://mosaicpd.com/blog.